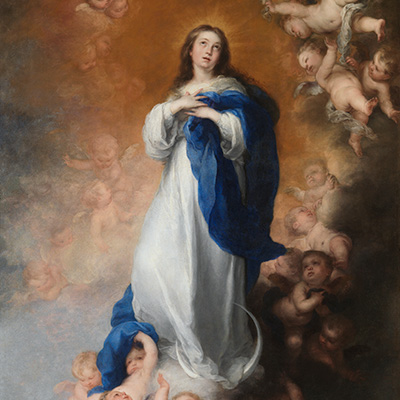 08 Dec Feast of the Immaculate Conception

Homily by Archbishop O’Brien
Archdiocesan Mass on the Feast of the Immaculate Conception
Tuesday, December 8, 2015
Opening of the Jubilee Year of Mercy

Today, Pope Francis inaugurated the Jubilee Year of Mercy in the Universal Church. He did so on the 50th anniversary of the closing of the Second Vatican Council and on the Solemnity of the Immaculate Conception. For us here in the Archdiocese of Kingston, this date has an added significance as we honour the Immaculate Conception of Mary, the Patroness of the Archdiocese and Titular of this Cathedral.

In the Brief which was read to close the Second Vatican Council, Blessed Pope Paul VI noted that this Council had the largest number of Council Fathers; that it was the richest in terms of the questions which had been discussed over four sessions; and that it was the most opportune, because “bearing in mind the necessities of the present day, above all it sought to meet the pastoral needs, and, nourishing the flame of charity” it has made a great effort to reach out not only to other Christians but to the whole human family.

During the past two years, there have been a number of celebrations focussing on the impact that various documents of this Council have had on such diverse matters as Christian unity and interreligious dialogue; our approach to scripture and the liturgy; as well as our understanding of the Church and our relationships within it as laity, religious, and clergy. So, we give thanks tonight for the work of this Ecumenical Council.

If we turn to the readings of today’s Solemnity, they are very familiar to us: the scene from Genesis of the Garden of Eden, and the portrait of the Annunciation from St. Luke’s Gospel. What we see played out here is a contrast that is important for us to grasp.

In the passage from Genesis and what immediately precedes it, we see this scene where God has placed Adam and Eve in a garden and has given them free rein to eat of all the trees there, except the tree in the middle of the garden which they are not to eat of or touch. God appears to be very generous to Adam and Eve, and, so, why this prohibition?

The serpent gives them a reason – not the right reason – but one which will lead them astray. He says that God doesn’t want them to eat of this tree because, if they do, their eyes will be opened; they will be like him, knowing good and evil. The serpent says, ‘You’re not going to die if you do this; God is just saying this because he sees you as a rival; he will be jealous and resentful; you need to do it; you need to take what God doesn’t want you to have.’ And, so, Adam and Eve follow the serpent’s advice.

If we turn now to the portrait of Mary and the angel in Luke’s Gospel, we see the reversal of this. The ‘Ave’ of the angel is the reverse of ‘Eve’, ‘Eva’ in Latin. Mary is addressed by the angel as “full of grace”, and this is how she reacts to the news that she is to be the Mother of God. She is ready to receive, in contrast to Eve’s desire to take. Mary is perplexed by the angel’s message and questions how this can be, but she trusts, and, so, she is able to receive what God wants to give her – where God wants to take her under the power of the Holy Spirit which will come upon her.

In the second reading, from the letter of St. Paul to the Ephesians, we are reminded that this is how God acts toward us as well; he wants to give us spiritual blessings. He has chosen us and adopted us in Christ. Like Mary, we are called to recognize and accept these gifts. Of course, like Mary, the acceptance of the gift doesn’t mean that this will not entail hardships and difficulties. However, like Mary, we are being invited to respond, “let it be done unto me according to your word”. Mary did not perceive all that her “yes”, her ‘fiat’, would involve; it called for a consistent faithfulness which is portrayed for us in the image of the Pieta, which portrays her as holding the body of her son taken down from the cross.

And, so, it is fitting that this Jubilee Year begins on Mary’s Feast. In his document announcing the Jubilee of Mercy, Pope Francis speaks of Mary as ‘Mother of Mercy’. He says:
“At the foot of the cross, Mary, together with John, the disciple of love, witnessed the words of forgiveness spoken by Jesus. This supreme expression of mercy toward those who crucified him shows us the point to which the mercy of God can reach. Mary attests that the mercy of God knows no bounds and extends to everyone, without exception.”

Later in this Mass, we will sing the hymn, Salve Regina. We ask Mary to turn her merciful eyes upon us and make us worthy to contemplate the face of mercy, her Son, Jesus. Pope Francis has spoken so often about mercy since he became Pope, and how God wants to extend that mercy to all of us and through all of us. The motto of the Jubilee year, ‘Merciful like the Father’, urges us to practice, in a special way this year, the spiritual and corporal works of mercy. They address not only economic poverty, but cultural poverty, like illiteracy and lack of educational opportunities; they also encompass social or relational poverty, like loneliness, social isolation, and discrimination; and, of course, there is spiritual poverty, inner emptiness and spiritual and moral confusion. During this year, we are invited to discover where these forms of poverty exist in our midst and to do something about them.

I would like to make just one further comment on the Jubilee of Mercy; this is something that Bishop Robert Barron has pointed out. When the Holy Father speaks of God`s mercy, it presupposes on our part a desire for greater conversion. To say that God is merciful is not to say that sin doesn`t matter. Mercy is what God`s love looks like when it turns towards the sinner, a word that Pope Francis often uses to describe himself.

St. Augustine remarks, miseria (misery or suffering) and misericordia (mercy) go hand in hand. In his commentary on the meeting between Jesus and the woman caught in adultery, he points out that, after Jesus said, “Let anyone among you who is without sin cast the first stone”, the Scribes and Pharisees went away. When Jesus is left alone with the woman, St. Augustine says that there are left two – misery and mercy (miseria and misericordia). When you add heart (cor) to miseria, you have misericordia, mercy. What we call ‘mercy’ comes about when someone’s heart is moved to enter the ‘misery’ of another.

The Holy Door which you see at the entrance to the Church will be opened this Sunday before the 10:30 a.m. Mass. The gesture of passing through the Door of Mercy is a recognition of the mercy which the Father extends to us in giving us his Son, Jesus, the door or gate to eternal life. To pass through the Holy Door is, as well, an acknowledgement on our part of our need for conversion and spiritual growth.

May this Jubilee Year of Mercy be a time for all of us to trust in God`s mercy so as to be brought forward to a better spiritual place in our life. May our practice of the spiritual and corporal works of mercy be concrete signs to all that the God in whom we profess our faith is, indeed, a merciful Father.