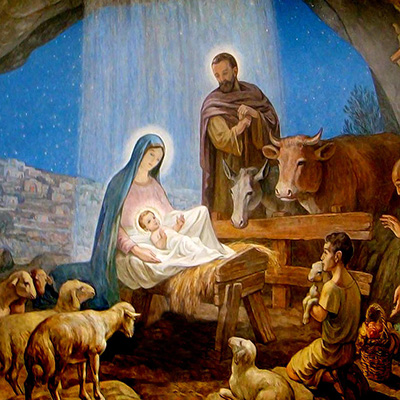 How beautiful are we if we accept the mission this morning of bringing the good news to our neighbourhoods that we can now see the human face of God in Jesus (cf. Isaiah 52:7)!
No one had ever seen God (cf. John 1:18) prior to Jesus’ birth, and now, all the ends of the earth have seen the victory of our God (Psalm 98:3bc).

Which victory is the psalmist talking about? A victory in which God “has revealed his vindication in the sight of the nations” (Psalm 98:2). What were the nations saying so that God would decide to reveal his vindication before them? The Empires of Egypt, Assyria, Babylon, Greece and Rome, each in turn had asserted in history their domination over the nation descending from Abraham, Isaac and Jacob, challenging the Lord’s claim that the descendants of Jacob are to Him His firstborn son. It all seemed a rather lost cause for the Jewish people at the time of Jesus’ birth. The Roman Empire’s domination was complete over what had once been called King David’s kingdom a thousand years before. And yet…And yet…he Lord “has remembered his steadfast love and faithfulness to the house of Israel” (Psalm 98:3).

Despite appearances to the contrary, God had never forgotten the people He had rescued from Egypt’s oppression, and brought back from exile in Babylon centuries later. Indeed, the ultimate vindication of God, in the face of the arrogant nations who oppressed Israel, is to make the object of their greed and pride the provident spring (cf. Genesis 22:8) from which will gush forth a worldwide blessing for all of them (cf. Genesis 22:18), turning their disposable victim into the necessary Lamb of God (cf. Genesis 22:8 & John 1:29).

God continues to be active in our world, sustaining “all things by his powerful word” (Hebrews 1:3). He is not an absentee God who could not be bothered to know us. On the contrary, the astonishing thing is rather the opposite: “He was in the world and the world came into being through him; yet the world did not know him” (John 1:10). Unlike the mundane indifference of the pagan world towards God, our Heavenly Father does not know us superficially. He does not come to the world as a stranger to it. Rather, “He came to what was his own, and his own people did not accept him” (John 1:11). It is all very strange that even Israel had largely forgotten to expect the return of the Jewish King foretold by Isaiah. And yet…And yet…

Some were still expecting the King’s return, but they were a remnant chosen among the poor: Zechariah, Elizabeth, Mary, Joseph, the shepherds, Simeon, and Hannah. Those who still expect the return of the King will soon reveal to the educated priests of Jerusalem, and the powerful court of King Herod: “Your God reigns” (Isaiah 52:7). How could God fulfill his promise to redeem Jerusalem, to comfort His people (cf. Isaiah 52:9)? Is God not in Heaven and therefore beyond us?

How else could the Father come to our world, but through His Son, “the reflection of (His) glory and the exact imprint of (His) very being” (Hebrews 1:3)? After all, if God sustains all things by his powerful word, it is not an ordinary word, a mere collection of the letters from a human alphabet, a few well ordered sounds emitted by human lips. No, this word is alive, this word is the divine presence, the “true light which enlightens everyone” (John 1:9). “In the beginning was the Word, and the Word was with God, and the Word was God” (John 1:1). This Divine Word has a human name, a human soul, and a human body. “And the Word became flesh and lived among us, and we have seen his glory, the glory as of a father’s only begotten son, full of grace and truth” (John 1:14). Who is this divine person who now share in our humanity, from whose “fullness we have all received, grace upon grace” (John 1:16)? “Grace and truth came through Jesus Christ” (John 1:17)!

If our busy modern world may choose to wrap itself still in the restless pursuit of happiness without surrendering to God; if the Jewish world is still for our benefit (cf. Romans 11:15-16) blind to the poor Messiah born in a manger, crucified on a cross, and risen from the dead, shall we this morning receive him, shall we believe in Jesus’ name, shall we appreciate that we have become in baptism by water and the Holy Spirit the children of God (cf. John 1:12)? Do we see ourselves as beggars, praying anxiously to manipulate a distracted

God or as the Father’s beloved children to whom the Kingdom has already been given?1 “Is Jesus speaking plainly to your heart about the Father? Is this the day to begin asking the Father in Jesus’ name?”2

I invite you to close your eyes and pray with me on this hope-filled Christmas morning: “Father, fill me with the Holy Spirit so (that) I (may) know the heart of Jesus. I want to co-labor with Jesus in prayer today. I will continue to ask You for good things, but right now I want to know what is on Your heart. Show me how to pray for the things in my realm of influence that are most urgent today. I believe You want me to build my hope with a history of answered prayers that will motivate me to pray with faith and confidence. Help me to trust that it is always Your desire to respond to my plea. Help me to know that in Jesus I will always find the yes to my requests.”3