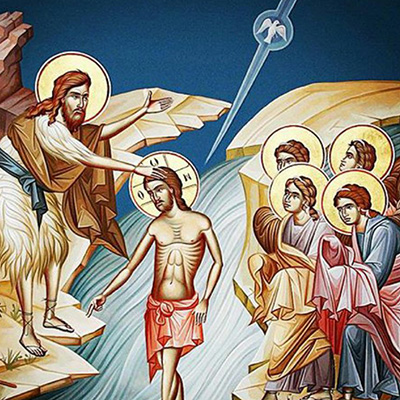 10 Jan Baptism of the Lord

The mystery of Christmas is the mystery of God with us, and the conclusion of the Christmas season, the baptism of the Lord by John the Baptist, expresses this beautifully. Let me help you to picture the scene in your minds as if you are watching it happen live while knowing with your 21st century minds that Jesus is God made man.

John the Baptist, Jesus’ cousin, is preaching by the Jordan river and is baptizing those who come to him as an act of repentance, turning away from their sins, and committing themselves to following God’s commandments in order to be in a right relationship with Him.

So far so good, Jesus is not a sinner, and therefore could easily excuse himself from John the Baptist’ meaningful ritual. After all, He does not need it in any way. But not needing something is not what determines what Jesus does. Jesus is the Only-begotten Son of the Father, and His mission is centered on showing the Father’s heart to sinners who have been deceived into distrusting God.
John the Baptist knows that he is preparing the way for the Messiah, and no doubt, his mother Elizabeth has revealed to him that Jesus his cousin, is the Lord. Had she not said to Mary decades earlier: “And why has this happened to me, that the mother of my Lord comes to me” (Luke 1:43)?

By the Jordan River, John the Baptist is baptizing the sinners who repent and preaching day in and day out that “one who is more powerful than I is coming; I am not worthy to untie the thong of his sandals. He will baptize you with the Holy Spirit and fire” (Luke 3:16). The people are growing restless. Who is coming? It must be the Messiah. His arrival must be imminent, for there is such urgency in John the Baptist’s voice.

Jesus is not going to disappoint the feverish expectation. He intends to come to the Jordan River himself and reveal to those who have just been baptized that He is God with us. How will He do that? Shall we expect a spectacular entry, fireworks, and ominous music to announce his coming? No, it is not the way of the Lord.

Surprisingly, Jesus is baptized last, going down to the River after the very last sinner has been baptized. Saint Luke wrote: “Now when all the people were baptized, and when Jesus also had been baptized…” (Luke 3:21) He, the sinless one, “the Grace of God”, appears, as Titus tells us in today’s second Scripture reading, “bringing salvation to all… He it is who gave himself for us that he might redeem us from all iniquity and purify for himself a people of his own who are zealous for good deeds” (Titus 2:11,14).

“The last shall be first, and the first shall be last” (cf. Matthew 20:16), as He himself exemplifies. He, the last one in the lineup of those going down into the Jordan for baptism is the first to be sinless.

He the first to rise from the dead will first take upon himself every sin which has been repented from and obey His Father to the point of death and death on a Cross (cf. Philippians 2:8).
Watch him. Jesus does everything with a purpose. He comes last in a lineup of repenting sinners (cf. Luke 3:21). He waits until the crowd that day has gone through the holy door of mercy represented here by the Jordan River. The last to line up behind repenting sinners is now manifested as the first, our Great God and Saviour. He comes last of all the baptized in the Jordan to leave no one behind. He comes last to save them all.

More than a thousand years before Jesus came to the Jordan, Joshuah led the Israelites across the Jordan to leave behind the sinful mentality which caused their 40 years of wandering in the desert.

Now the new Joshuah, Yeshua, Jesus, is showing up at the Jordan, revealing the glory of the Lord by saving the sinners who have dared to clear a highway across the desert of their wandering hearts for Him, their God (cf. saiah 40:3-5).

And the Merciful Father approves of Jesus’ choice to line up behind those who have “renounced impiety and worldly passions and in the present age, (pledged themselves) to live lives that are self-controlled, upright, and godly, (waiting) for the blessed hope and the manifestation of the glory of our great God and Saviour, Jesus Christ (cf. Titus 1:12-13).

Adam and Eve once distrusted and hid from God, afraid and ashamed after their tragic act of distrust. Now thousands and thousands of years later, one who in His humanity shares their blood, hears the voice Adam and Eve were longing to hear once again say: “You are my Son, the Beloved; with you I am well pleased” (Luke 3:22).

In an instant, the Holy Spirit’s fire burns away the lie of Satan (cf. Luke 3:16). God does not keep the best away from us as Adam and Eve once painfully regretted believing (cf. Genesis 3:5).

Rather, God gives us his best in giving us his only begotten Son so that we may not perish but have eternal life (cf. John 3:16).

From now on, Jesus has made it possible for us to be restored to the dignity of sons and daughters of God in the sacrament of baptism.

We should all be celebrating the day of our baptism in such a festive way that those who have forgotten their baptism may once again return to an intimate relationship with their Heavenly Father.

We should all be digging out of its box the copy of our baptismal certificate to memorize the date of our redemption. We should inquire to our family members as to where we were baptized and phone the church in which we were baptized to obtain the date of the day of our divine restoration. We should be so excited to be baptized in the name of the Father, and of the Son, and of the Holy Spirit (cf. Matthew 28:19) that any unbaptized we meet would start desiring baptism because of the joy of our belonging to the Holy Trinity.
To all of you who have joined us today, wandering into this church in search of meaning, and to all those who begin to see the glory of the Lord, I invite you to close your eyes and join me in this prayer:

“Jesus, I surrender to You. I thank You that Your life reveals to me the home that my heart is searching for. Following You, my heart is stirred with passion to see the Father, to know Him as You do. Because of You, God is my Father… I am grateful beyond words that You have come to reveal Him to me.”1