"Sing praises to the Lord, O you his saints,
and give thanks to his holy name."

The Choirs of St. Mary’s Cathedral have a distinguished history of service to the Cathedral. Drawing from a wealth of sacred music ranging from early monophonic chant, 16th Century polyphony, Romantic to Modern, the Cathedral Choirs seeks to offer music characterized by fine tone, rhythmic precision and thoughtful interpretation.

The Cathedral Choir, established in 1842, serves as the principle choir of St. Mary’s Cathedral, singing for the 10:30 am Mass from September to June – and for all major cathedral Masses including the Midnight Mass of Christmas, the Triduum, Archdiocesan celebrations and for functions such as ordinations. A mixed ensemble of volunteers and paid professional singers, the Cathedral Choir sings a variety of music from the 12th century to the present day. The choir sings unaccompanied pieces, as well as pieces accompanied by the Cathedral Organ. The ability to sight read is an asset but not absolutely required. Practice materials are provided to all choir members. If you are interested in joining the choir, please contact Jeffrey Moellman to set up a meeting.

The Sunday Evening Worship Team provides the music at the weekly 7:30 pm Sunday Mass during the university fall and winter terms. The members of the Team are selected from among young people who attend the 7:30 pm Mass, many of whom are students at Queen’s University or St. Lawrence College. Guitar and piano provide support for the vocally driven music sung at this Mass. The music at this Mass ranges from traditional chant and hymns to contemporary praise and worship music.

Funerals are celebrated with St. Mary’s organist and cantor, the music being similar to that at a canted weekend Mass (except for those things particular to a funeral.)

Couples intending to get married in the Cathedral or St James’ Chapel should contact our organist Jeffrey Moellman for information on Music for Weddings after reading through the information form.
Click below to download the form information regarding selecting music for wedding ceremonies.
Download

The Traditional Latin Mass (according to the 1962 Missal) is celebrated once a month on a Sunday at 3:00 pm in St. James Adoration Chapel. The particular Sunday for each month is announced on the Kingston Traditional Latin Mass official facebook page and in the Cathedral Parish bulletin. The Schola rehearses on a weekly basis, singing a range of chant and polyphony. Contact Jeffrey Moellman for more information about joining the Schola. 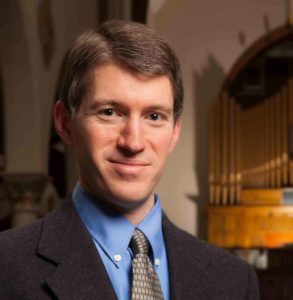 JEFFREY MOELLMAN, a native of Independence, Kentucky, is Director of Music and Organist at Saint Mary Cathedral. Mr. Moellman earned a Bachelor of Music in Organ Performance from the Cleveland Institute of Music as a student of Todd Wilson, and a Master of Music in Choral Conducting from the Kent State University. He has dedicated new and restored organs in northern Kentucky, and was organist for the principal liturgy for the 2008 Central Region convention of the National Association of Pastoral Musicians, held at Cleveland’s Roman Catholic Cathedral of Saint John the Evangelist. He has extensive experience as a vocal and instrumental accompanist and continuist for choral and orchestral works.
In addition to regular solo recitals, Mr. Moellman has presented frequent collaborative performances from 2011 to 2017 as part of Chamber Music Orillia (CMO), of which he was founder and Artistic Director. His activities for CMO also included directing the CMO Youth Choirs and the CMO Chamber Choir, comprised of some of the finest choral singers from across Simcoe County and Muskoka. Mr. Moellman was the recipient of the Orillia and District Arts Council’s 2015 Educating in the Arts Award in recognition of his community outreach and educational efforts. Jeffrey’s choral technique was further shaped during time spent as a vocalist with a wide variety of ensembles, including one-on-a-part, chamber choirs, symphonic choruses, community choruses, town-and-gown, scholas, and amateur-professional church choirs. Recently, Mr. Moellman was a participant in the 2014 Choral Conducting Symposium as part of the Toronto Mendelssohn Choir’s Emerging Conductors Program.
Prior to his appointment to St. Mary’s Cathedral, Mr. Moellman held positions as Director of Music at Church of the Guardian Angels in Orillia, Ontario (since 2010) and churches in suburban Cleveland. He served for eight years as Choir Director and Accompanist for High Holy Days at Congregation Bethaynu in Pepper Pike, Ohio, and regularly accompanied services at prominent synagogues throughout Cleveland. As a musician dedicated to sharing his art, Jeffrey served on the faculty at Our Lady Seat of Wisdom Academy (now College), a Catholic liberal arts institution in Barry’s Bay, Ontario. He has adjudicated vocal and piano divisions for local music festivals, presented a number of choral workshops and cantoring master classes for congregations in the GTA and Ohio, and frequently was called upon to lead rehearsals for the Cellar Singers in Orillia. Jeffrey is an active member of the Royal Canadian College of Organists, having served as President of the Simcoe-Muskoka Centre, and as a clinician at the Summer Institute of Church Music’s Spring Sing (2014) in Bracebridge, Ontario.
In addition to his musical endeavours, Jeffrey holds a B.A. in Computer Information Systems and an A.A. in Business Administration from Thomas More College (Crestview Hills, Kentucky).​​