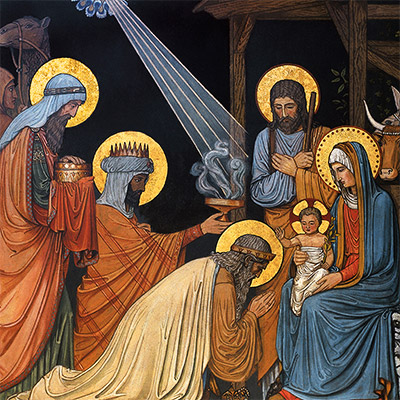 03 Jan Epiphany of the Lord

Epiphany- a word that means manifestation, revelation, disclosure, unveiling, appearance, uncovering, as in “the dawn from on high that is breaking upon us”, as in, “the people who lived in darkness have seen a great light”. Jesus says, “I am the light of the world`. Epiphany is the feast of the coming of the light of Christ into the world, for the whole world. It is a Christmas feast, is sometimes even referred to as `little Christmas`. This the feast day when some Christians exchange gifts, in commemoration of the gift that is Christ, but also in memory of the gifts that the original wise men gave to the Christ child. In the early Church this feast was the main celebration of the Nativity of Christ. Only gradually did December 25th come to be celebrated as the birthday of Jesus. In some eastern Churches, this is still the major Christmas feast. For us, it is still the other Christmas, the `little Christmas`. The time between the two (Dec. 25th and Jan 6th) is traditionally referred to as the twelve days of Christmas, and liturgically, as the season of Christmas. The time between the anticipation, waiting, expectation, and the hope of Advent, and the extraordinary transformation of the ordinary that we refer to as ordinary time.

The feast of Christmas and the feast of Epiphany are the two bookends of one feast, one festive season. As liturgical feasts, they are not just a remembrance of things past, as if we were simply celebrating the anniversary of a past event, the birth of Christ, or the coming of the Magi. A different kind of memory is at work here, like the remembering that is the Eucharist, `do this in memory of me`; liturgical memory makes the truth and transformative power of the original event present in the here and now.

The Word of God has become flesh in Jesus of Nazareth, and this changes everything. The whole of reality has been transformed-transfigured-metamorphosized by this saving event. As an ancient Christian author puts it, `the flesh is the hinge of salvation`. A later early Christian author puts it this way; `what he did not assume, he could not save.` The infinite has become finite, in the words of a poet, `Infinity dwindled to Infancy`. Human nature has been renewed, restored, transformed in the person of Jesus Christ, the New, the Second Adam. In Christ a new beginning, a new future is possible for each one of us and for humanity as a whole. `The people who dwelled in darkness have seen a great light`. À light of revelation to the gentiles`. Epiphany, `little Christmas`, is not so little after all. In the humanity of Christ, the dawn from on high has broken in upon us, scattered our darkness, and shattered our deafness. This Epiphany event is not just a local event, the birth of the Jewish messiah, celebrated by angels and poor religiously marginalized shepherds, although it is that. When Christ is born, when God the Word becomes flesh in Jesus, even those previously excluded from the covenant of mercy, the gentiles, the pagans, the goyim, come on pilgrimage from far away, to greet him, to welcome him, bearing gifts for the new born King. And more than this, before they offer their gifts of gold, frankincense and myrrh, they come to worship this child, to pay him homage, literally, to prostrate themselves before him. Before they give him their gifts, they first receive the gift of this child, and they receive him for who and what he is. As our second reading says, “In former generations this mystery was not made known to humankind.“ These wisdom representatives from the east were the first to recognize that “the gentiles have become fellow heirs, members of the same body and sharers in the promise of Christ Jesus through the Gospel.“ The good news, the glad tidings of the gospel has been extended to include the whole of humanity, then and now. As Pope Francis has said, in relationship to this Jubilee Year of Mercy `no one is excluded from God`s mercy`.

Before they give their gifts, these wise ones give themselves. Only the gift given out of the treasure house of one’s heart will have true weight and meaning. It is more important to give the self than it is to give a gift, and in our gift giving to first receive the gift of the other person, and to give of ourselves in all our giving. There is a close connection between the heart of giving and the giving heart. Didn`t Jesus say, `where your treasure is there will your heart be also.` Let us listen once more to the gospel today. “Overwhelmed with joy. On entering the house, they saw the child with Mary his mother; and they knelt down and paid him homage. Then, opening their treasure chests, they offered him gifts of gold, frankincense, and myrrh.“ On the occasion of this our Epiphany, let us also journey and set out on pilgrimage with our wise companions from the east, and following the star that God has set before us, may we too find the child who has already found us by giving us the star. May we give ourselves to Jesus, and present to him out of the treasure chest of our hearts, out of the refiners fire of our lives, the gold of our love, the incense of our worship and praise, and the Myrrh of our suffering and struggles on this brief pilgrimage of our lives. And, giving to us the gift of himself, God-with-us, he gives us light, manifestation, revelation, Epiphany. Hope for all our tomorrows.